An eloquent reflection on the power of devised theatre, and the ways in which participation is transformative.

Fifteen minutes before our performance I waited with my fellow classmates in the cast room just outside of the recital hall. From the small room we could hear the footsteps and excited voices of the audience entering the stage, which had been creatively assembled for our piece of community theater, “Origins”. I tried to practice my lines in my head, but gave up. I felt ready. Over the previous six weeks that we generated from scratch Origins I had been preparing both in mind and body what would come next. It was a moment to soak up the joy that our hard work and deep exploration of our family stories and derived theatre had produced, so I took a deep breath enjoyed the moment.

What felt so real in the cast room, our first day of class seemed like a fantasy from an inspired, but perhaps over ambitious professor. I… 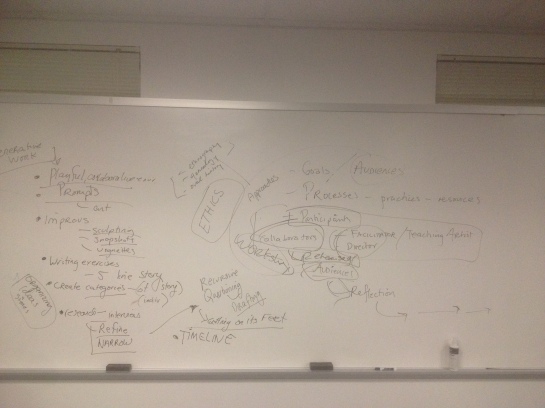 I used two photos from our class (which I can remove, if Brittany or any of you asks me to!)

I’d like to link to our class blog. Is that okay with you all? If not, please let me know and I will make any changes requested. 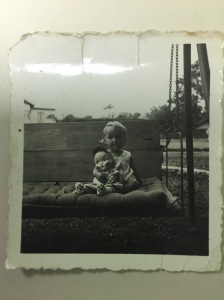 Pietro Sanfilippo and his wife Caterina, sit in their small home in the port city of Porticello, Sicily. The once bustling fishing village has now fell silent. The young have left for America. They finish eating a fish dinner, and are continuing to sip their wine. On the wall hangs a cross and a picture of Santa Maria del Lume (Holy Mother of the Light) the Sicilian Patroness. In front La Santa Maria, their conversation sounds more like prayer as they discuss the future. In Caterina’s hand is a postcard from their daughter, Rose, in Brooklyn, NY. She writes of her longing for them to be together, but also of the prosperity of her new home. Its an invitation to join her and her other brothers and sisters. Will they stay or join their seven children in America? Finally, Pietro stands and walks to the window. The golden mediterranean sun is just beginning its descent behind the dry sicilian hills, when he says, “Che dio mi aiuti,” we’ll leave next month.” His face is calm like the resting sea of the port, yet inside brews a storm of uncertainty. 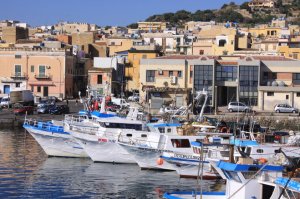 Jack writes about his Grandpa

His dad, my great grandfather(name?) played the violin in the St. Louis Symphony. Musical notes reverberated through the family.

In fact, my grandpa Bernard could fund his medical school at SLU he played saxophone for silent movies and boat excursions.

He missed his anatomy final because his teacher wouldn’t excuse him for a two week boat trip.

He always claimed he knew anatomy better than most because he had to take it twice. He graduated from SLU med school in 1928.

He loved to fish and drink beer.

His most cherished possession was an award from the pope for treating “The Little Sisters of the Poor” (clarify) for umteen years without any compensation for doing so.

Because he was a physician he had the liberty to issue prescriptions for whiskey during prohibition. From time to time he would write a prescription for a half pint and he and his brother would go to a football game and have some fun, strictly for medicinal purposes of course.